“The challenge in Hall H, ironically, has been the DCI security specification, and QUBE stepped up with a solution that was unique” said Riche Stanley, Director of Technical Sales for MiT.  “Since security parameters prevent D- Cinema duplication and distribution to multiple screens, the challenge became the synchronization of multiple D-Cinema systems while maintaining an operational interface that is efficient and fail safe, for a live production environment like Hall H”. Very similar to Comic-Cons of the past, studios delivered encrypted, never before seen content of upcoming releases, which remained encrypted all the way to the projectors flying 30 feet above the heads of Hall H attendees.

“We now have a system that meets the needs of the special event business without compromising the security of the content,” explained Ken Freeman, the technical director for Hall H. “We don’t have to bypass any security features to get images displayed on four screens or into redundant projectors. The team from MiT and Qube delivered a terrific solution that is robust and secure, ensuring that our filmmakers can bring their best with full confidence.  It also complies with the current specification of the Digital  Cinema Initiative (DCI), and means Hall H is now 4K and HFR (High Frame Rate) ready, for when demand arrives.” MiT Engineers enhanced the system with purpose built custom rigging cages and drew from their own suite of MiT manufactured d-cinema products, power management, custom switching, and automation. On July 17th – 22nd  for 12 hours a day more than 6,500 attendees per session, received “their fix” when MiT’s expert personnel joined the Hall H production staff to effectively deliver the technology and services needed for the Hall H Comic-Con experience.  MiT’s solution helped Hall H secure its reputation into the future as the premier event for the annual showcasing of Hollywood Blockbusters. 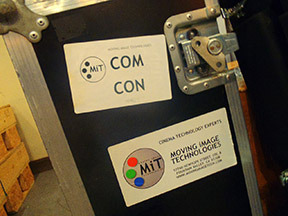 Comic-Con’s Hall H has been called variously the “Ultimate Movie Church” or the “Inner Sanctum” where everything important happens. Hall H is enormous, with a seating capacity of over 6,500, but you had to be in line no later than 3:30 AM to get in.  It’s where the biggest premiers, trailers, panels, and Comic-Con’s largest images are shown.  Because of the significant number of  Hollywood studio screenings, the projection had to meet exacting standards, and for the first time all the projectors were required to be DCI-compliant.

Qube Cinema, based in Burbank, CA, is an international manufacturer of digital cinema technology and mastering solutions. A subsidiary of Real Image Media Technologies, Qube Cinema draws on decades of experience in cinema and holds a leadership position in the transition from analog to digital technology. The company is committed to creating a seamless digital cinema environment for exhibitors, filmmakers and postproduction companies with DCI-compliant products that are flexible, reliable and highly cost effective. Qube Cinema’s product lines include the Qube XP series of servers, QubeMaster software solutions, Qube Keysmith KDM generation and the Qube Xi 4K Integrated Media Block.