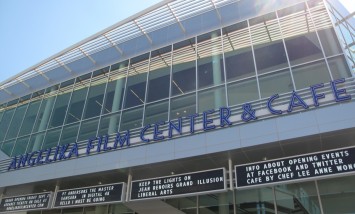 MERRIFIELD, Va. — This D.C. suburb is about to gain a theater known around world. The Angelika Mosaic which officially opened on Sept. 21, is the first Angelika in the D.C. area and only the fifth for the New York-based chain.

The eight-theater cineplex will screen the types of films that will please patrons of E Street and West End Cinema. A mixture of mainstream, probable Oscar winners (“The Master”), exclusive-to-the-area Sundance darlings (“Hello I Must Be Going”) and foreign classics (“Grand Illusion”) will make up the opening week.

The theaters feature stadium-style seating, large reclining seats and enough room from the screen to the first row to make every seat a good view. Unlike some theaters, the Angelika’s screen size does not suffer from room to room. Tickets come with assigned seating, making rushing from the ticket booth to the theater unnecessary.

In addition to high-quality programming, the cineplex will feature a cafe featuring finger foods by “Top Chef” Lee Anne Wong. Patrons will be allowed to bring the food into any of the theaters. In addition to classic movie theater fare like popcorn, nachos and hot dogs, the concessions will also sell craft beer, wine and sake.